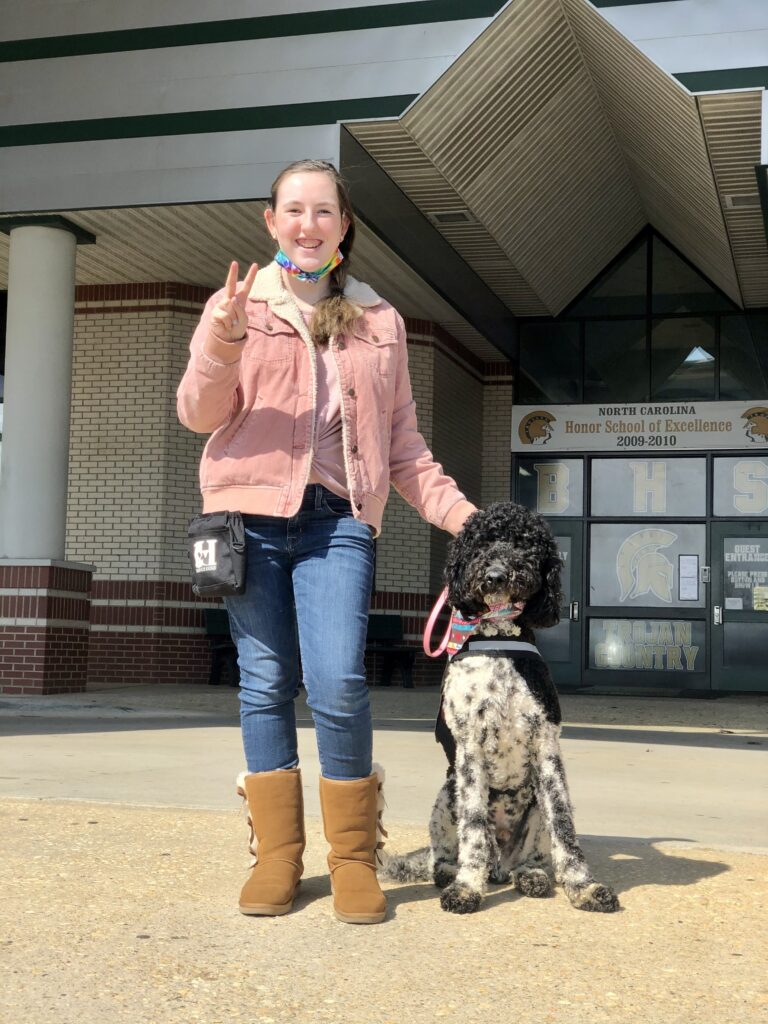 At Highland Canine Service Dogs, we have been proud to help families across the nation by providing high-quality service dogs.

Below is a small selection of the families we have worked with over the past fifteen years. 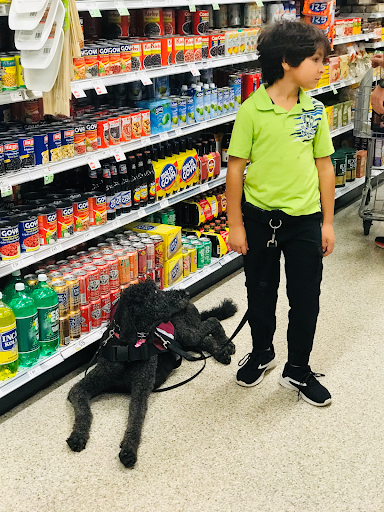 As Mariano’s mother explains: “Having the ability to put Peach in a down in the supermarket is amazing. I can turn around and grab what I need to move around the aisle – and I know Mariano won’t go anywhere because Peach is in a down position and Mariano is tethering her.

I still pay attention to my son, but this gives me the ability to do what I have to do and not to turn around every 10 seconds to see if he still there, or having to hold his hand all the time while I’m grabbing something. The ability to have her in a down position as an anchor is amazing.” 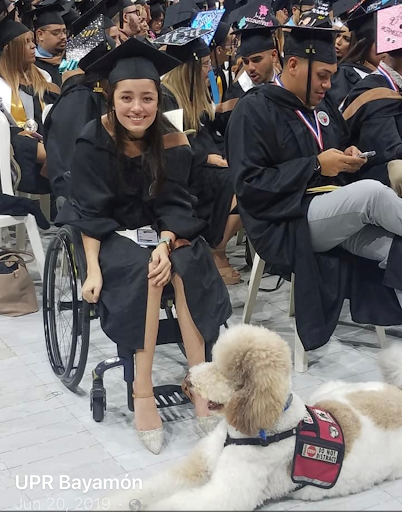 Gabriela suffers from a condition called Friedreich’s Ataxia – an inherited disease that damages the nervous system and affects the movements of the muscles in the arms and legs. Gabriela completed a Bachelor’s degree in Accounting, after overcoming multiple health challenges. Thanks to Lelo, her adorable and faithful Mobility Assistance Dog, Gabriela gained greater mobility and independence during her years of study. 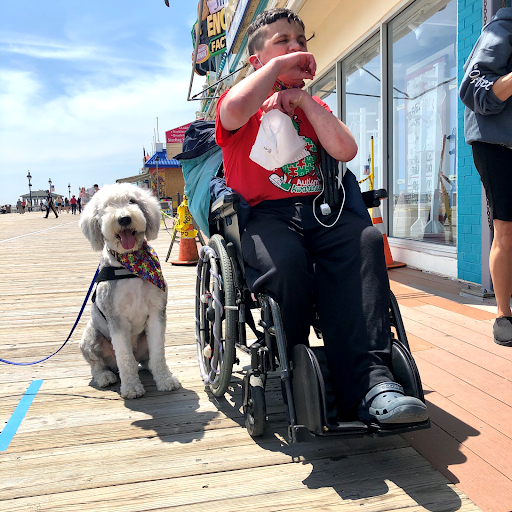 Louis’ mother explains: “After having a vacation home at the Jersey shore since Louis was born in 2003, Louis had never walked to the beach or boardwalk. He was in a stroller, then he went into a wagon, then we bought a bigger wagon with beach wheels and then my husband built a beach chair so we could push him.

When Barney was delivered in the middle of Covid, we drove to Ocean City, NJ for a day with the trainers from Highland Canine. It was the first time Louis ever walked up to the Boardwalk. I walked behind my husband, Louis and Barney in tears.

At that moment Barney was worth every penny we had spent to get him.” 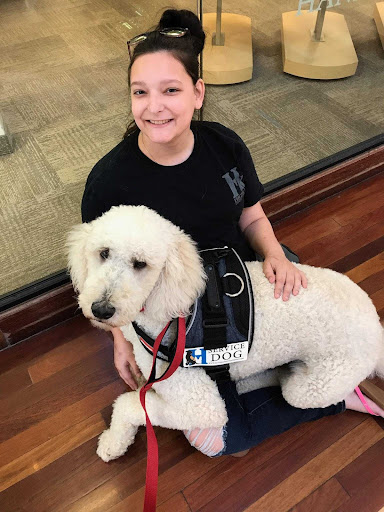 This handsome Labradoodle does everything in his power to keep his other half happy and safe. Tucker will interrupt Domianna whether she is nervous picking or having a severe, stress-induced meltdown. Although the job is not easy, Tucker is willing to do anything for his best friend!

Dianne, Domianna’s grandmother, explains how Tucker and Domianna have forged a strong bond. “Today, Domianna got upset at the mall when a person made a rude comment about Tucker. Domianna yelled back at the person and Tucker came up to her and leaned against her leg. Domianna asked him to lay as she sat down on the floor, and Tucker automatically got into her lap. I’m glad Tucker was there to help – without him it would have been a much worse situation.” 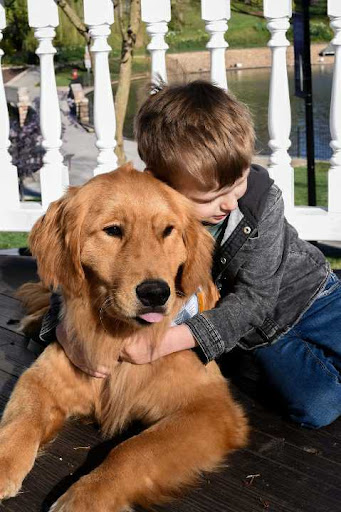 Milo and his new adventure buddy, Dexter, make an unstoppable team! Despite Milo being a little weary of Dexter at first, they quickly became best friends when Milo realized Dexter was not interested in stealing his toys but hanging out with him instead. We love to see how close these two have become since delivery and are excited to see what great things they achieve together.

Brittany, Milo’s mom, talks about how a recent experience demonstrated the progress Milo has made since being around Dexter.

“Dexter went to his first hockey game. We did a lot of tether practice. Milo was not feeling the loudness but he really liked this lady, so we used Dexter to facilitate a conversation with Milo and the lady. Milo let her pet him and he said two words he has never said before while they talked. So that was great. Also a band of 20 weiner dogs walked by at the same time for an event, I was impressed with Dexter not getting distracted.” 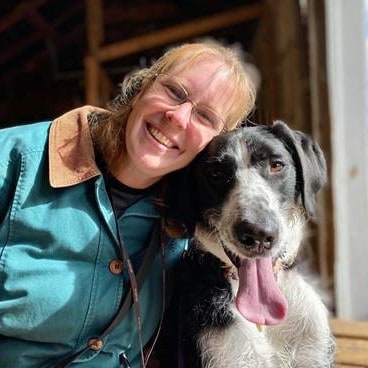 Due to the pandemic, Barnabas’ handler Rachel has been taking her therapy sessions online. Normally, for in-person sessions, Rachel’s therapist would give Barnabas the command to “touch” Rachel several times during the sessions. When they  switched to online sessions because of Covid lockdowns, Rachel assumed that she was going to have to cue him to touch her. She didn’t think he would respond to her therapist giving commands over video chat.

It did take him a couple of weeks of practice, but he will now “touch” in response to her therapist’s commands! Rachel was really impressed that he learned to respond to just the sound of the therapist’s voice. “Barnabas has impressed me by working in ways that I wasn’t sure were possible,” says Rachel. 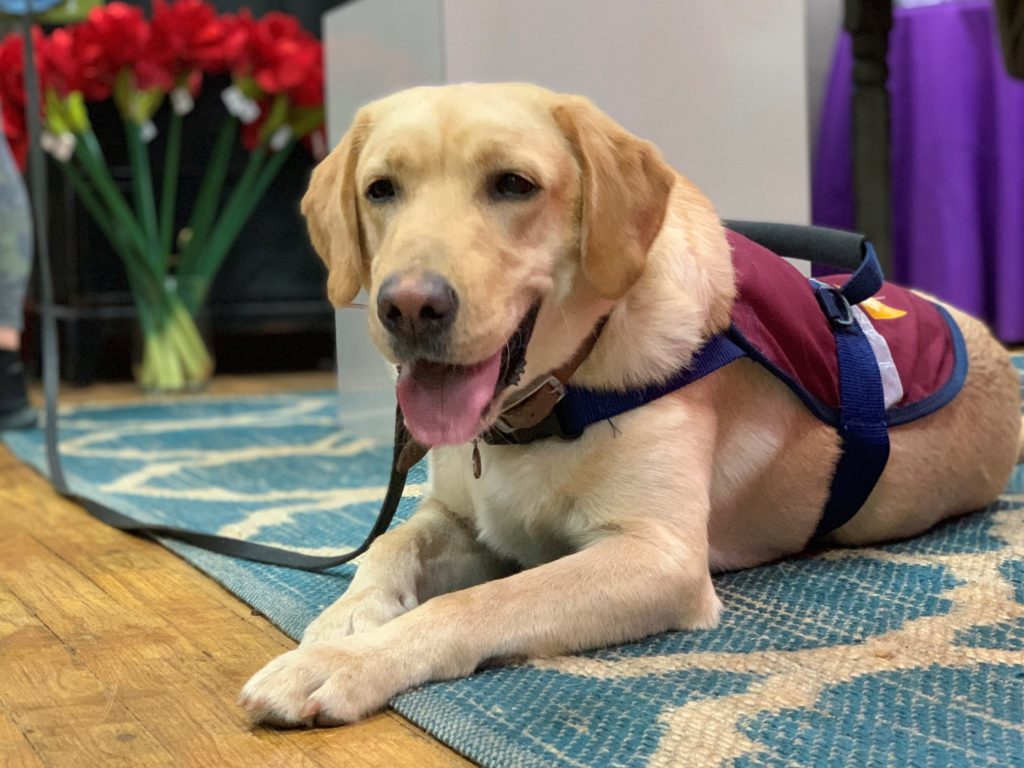 McKenzie was at school and she was put in a group for a project. She started having a meltdown and was trying to not let it show – Ranger got up and began nudging her until she started petting him, helping to subdue the meltdown.

“Ranger is a blessing to our family,” says McKenzie’s mother. 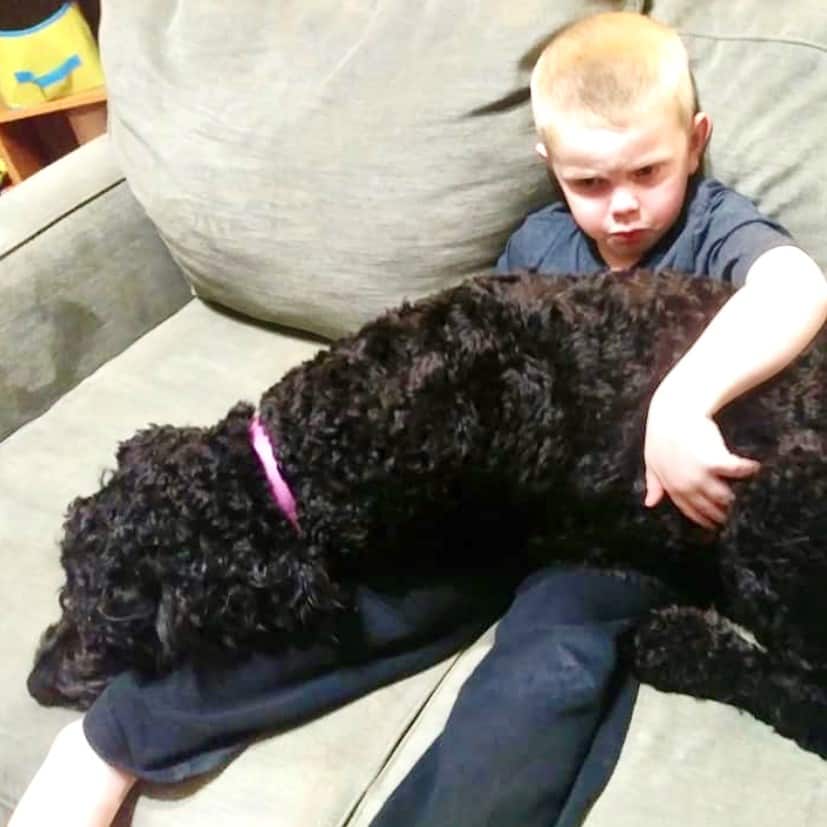 In the photo above, you can see Charkie performing her “lay” task for deep pressure therapy to calm Ethan during a meltdown.

“Just wow! What an amazing sight this was,” explained Cassie, Ethan’s mother. “It helped Ethan calm down so much faster than usual. This was the tail end of it all and a precious sight indeed!

I can’t say enough good things about Highland Canine. Charkie has been an amazing help and addition to our family!” 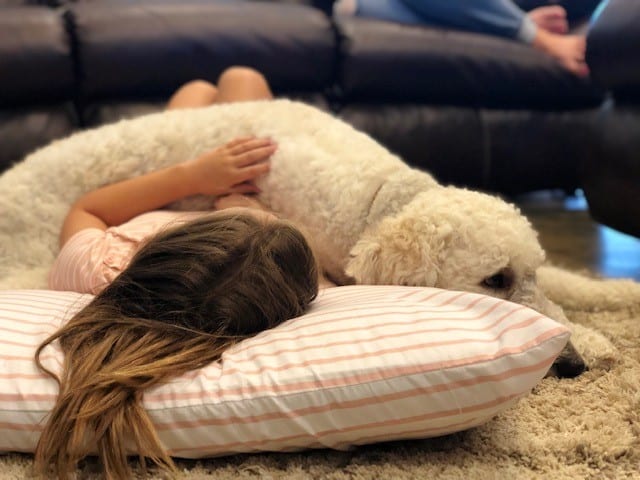 Recently, Lacy and Rai were in completely separate rooms, when she heard Rai gag – this is how Rai’s seizures start. Lacy took off running and began alerting!

“Tear of joy are streaming down my face! We have had a rough few days with Rai and Lacy has been on high alert and alerting more and more,” explains Emily, Rai’s mother. 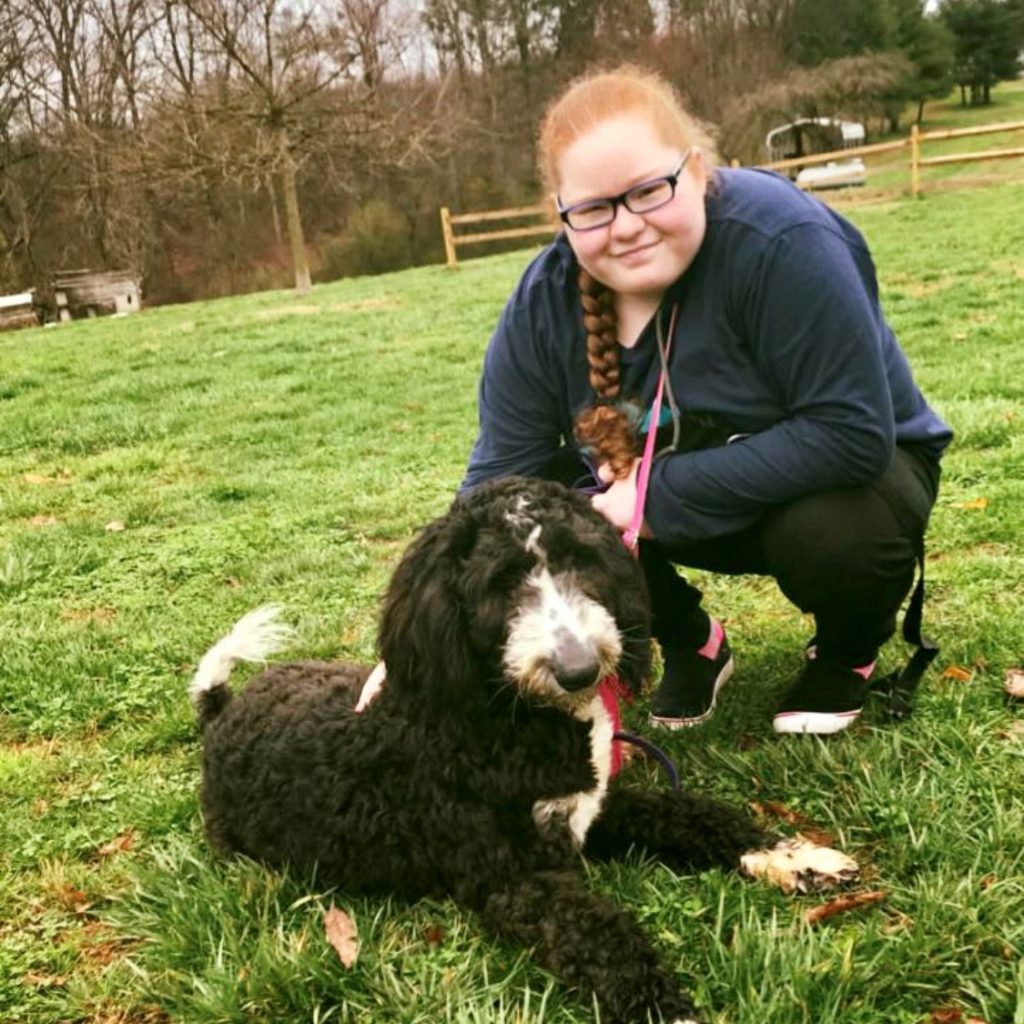 Nearing adulthood can be intimidating and Emily’s mom wanted to make sure she was on the right track for independence. Working with her service dog Radar throughout her teen years has helped improve Emily’s social skills and confidence.

“Since Radar has joined our family, Emily has become more independent and confident,” says Amanda, Emily’s mom. “This year, her senior year, is the first year she has not needed support at school. That speaks for itself.” 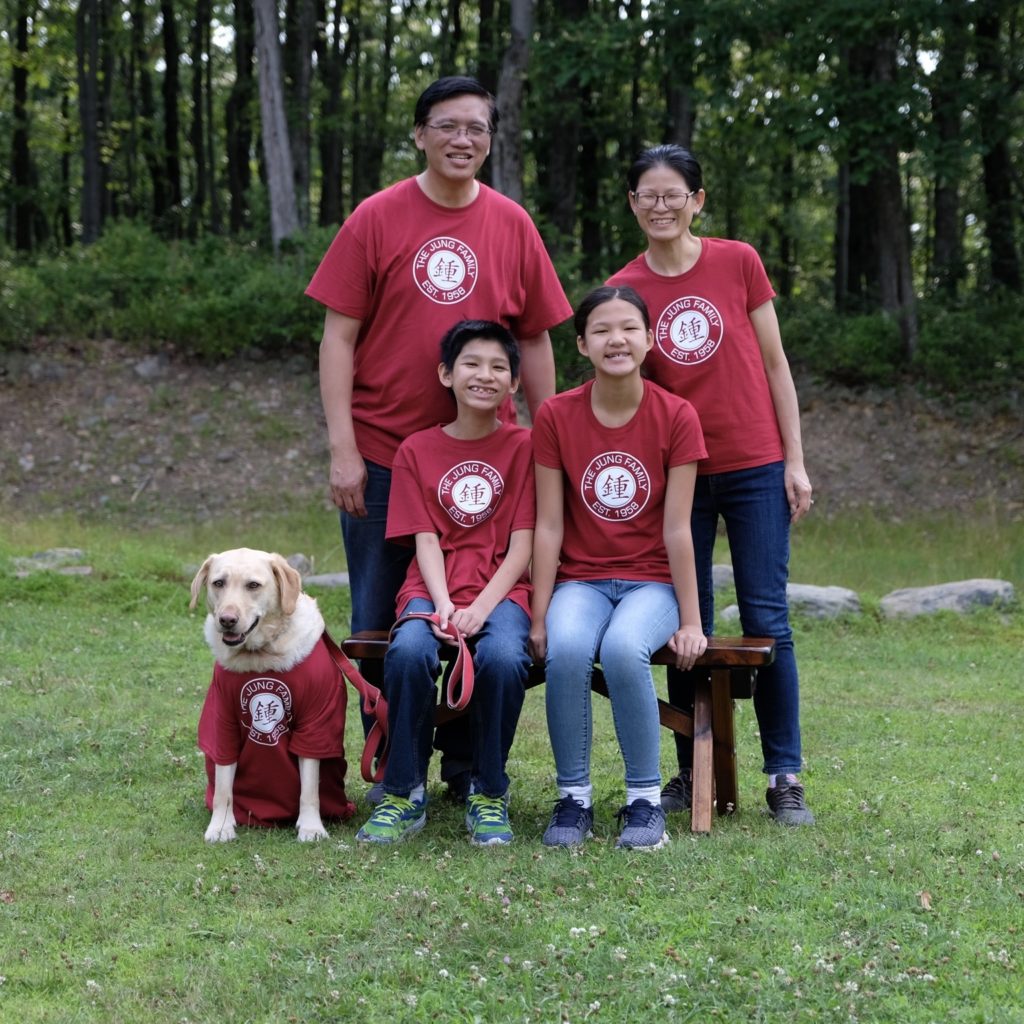 Trained in tasks such as deep pressure therapy and stimulation interruption, Cody’s goal when he started working for his boy Eric was to become his best friend and assist with the struggles he faced with his autism. With Cody’s help and dedication from his parents, Eric is becoming quite the little gentleman!

“Eric and Cody are doing so well and we don’t deal with the meltdown issues that we had before thanks to Cody and Highland Canine,” says Cody’s father, Kurt. 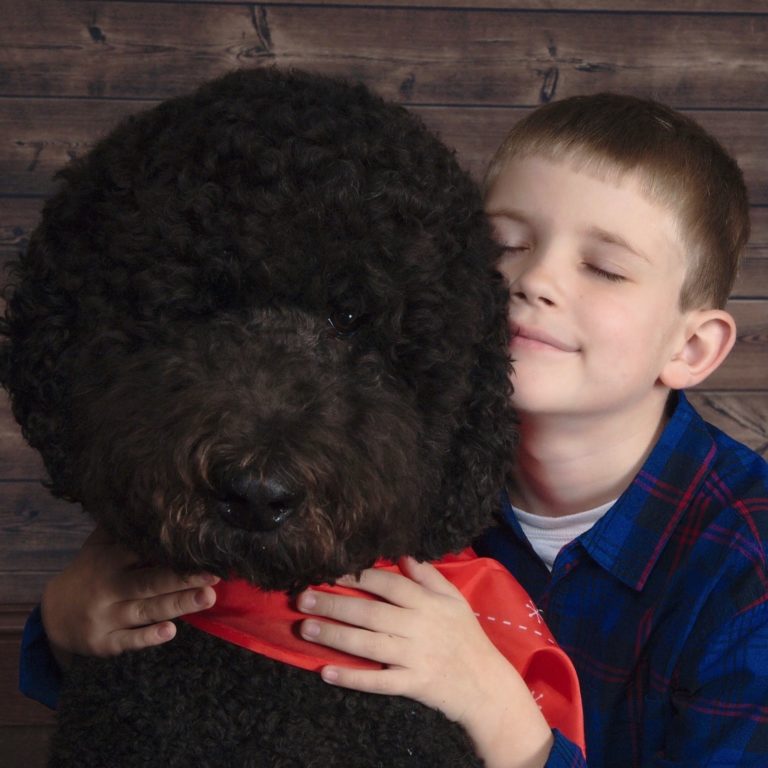 Haydan’s mom reported that he and Darth quickly became best friends, and that it was clear they were meant to be.

Since receiving Darth, Haydan has become far more interested in trips out of the house and is excited to interact with others, especially when it comes to talking about his dog. The two constantly look for eachother and have a true one-of-a-kind bond.

“Darth made it so it’s like he [Haydan] doesn’t have a disability anymore,” says Brandi, Haydan’s mom. 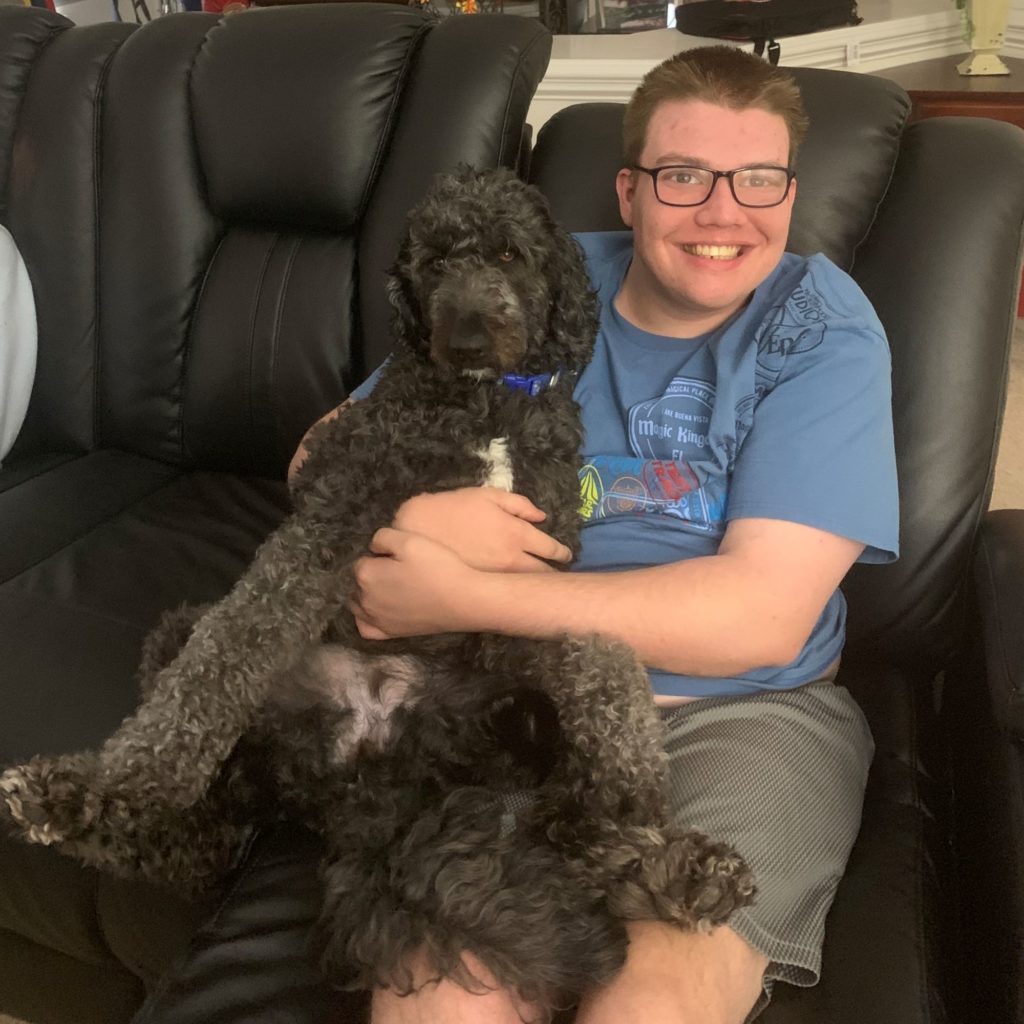 Dual trained in both autism and wheelchair assistance, Amidala offers a variety of tasks to help in the daily life of her boy, Canon. From retrieving items to pulling the covers up over Canon at night, Ami has been an invaluable family member, tending to both Canon’s physical and emotional needs. After years together, the two have become very close and the family can’t imagine life without this little Goldendoodle anymore.